GO and Startselect on Apex

GamersOrigin is glad to announce the arrival of a whole new Apex Legends team: Romain “wSerious” Dittmann, Ivan “Osnazeni” Markeljic and Matthieu “Mpé” Pereira. They will proudly represent GamersOrigin during the next competitions held by Electronic Arts and Respawn Entertainment, starting with the Preseason Invitational thanks to an invitation sent by the tournament organizer. This event will gather the world 80 best teams in Cracow, Poland, from September, 15th, to September, 18th.

The GamersOrigin Apex Legends team will have its brand new partner: Startselect. Startselect website and app allow you to purchase gift cards, in-game credits, DLC, Season Pass and entire game codes with the approval of video games editors. Indeed, Startselect works directly with video games creators to ensure that the code provided works perfectly well. Once you have bought the code, you receive it by email and can use it immediately.

To celebrate this partnership between GamersOrigin and Startselect, you can use the promo code GOWIN to benefit from a 5% discount on every product in the Startselect shop. The perfect opportunity to buy Apex Coins! 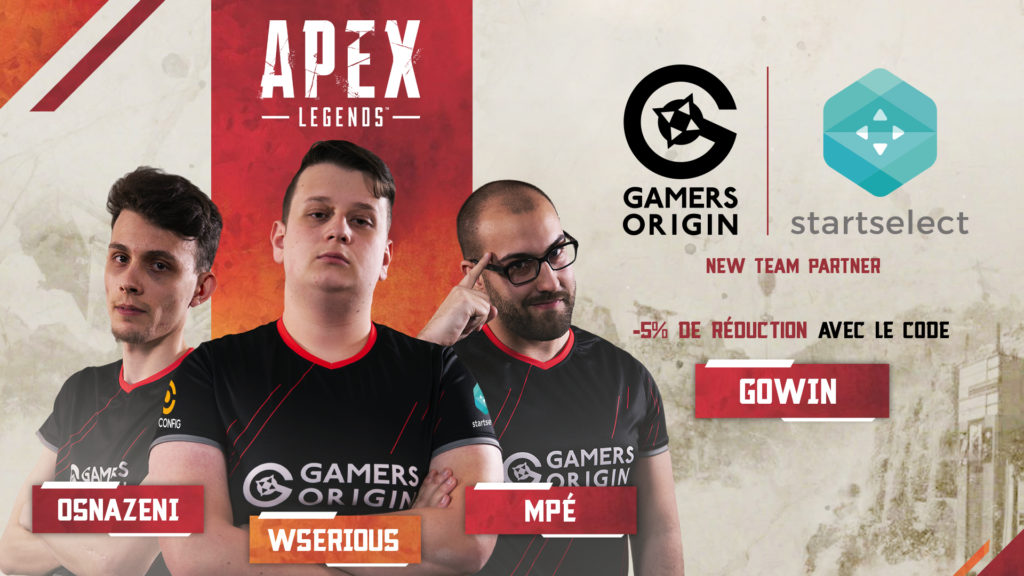 GamersOrigin decided to recruit 3 French players to start its journey on Apex Legends. The line-up proved its cohesion and its skill during several tournaments, thanks to its teamwork, which is the result of several months of collaboration. Indeed, they have been playing together since February and it bore fruit: the roster ended 4th at the DLive Tournament 2 in March, 2nd at the Catalane 2019 in April and second at the 5th APEX.PRO Europe League season in June.

The line-up has been playing Apex Legends competitively since its launch in February and all the roster members have already been part of an esport team before Apex Legends. Mpé and Osnazeni played Overwatch together while wSerious was for a long time a top-ranked Team Fortress 2 player. He also competed in multiple ShootMania LAN. Moreover, thanks to the trio progression in ranked games, wSerious was the first player in the world to reach the Predator rank with 2.000 points.

According to Mpé, having played to Overwatch grants the team members a huge advantage: both games are similar, being fast-fps that use heroes with unique abilities and allowing various strategies.

The Preseason Invitational will be the first real competitive tournament on Apex Legends. We will try to have constant results in games and to stay focused on our gameplan whatever happens. It will be a very intense tournament with groups of 20 teams and only the top 10 moving forward, the other 10 ones going to the loser bracket. We will do our very best #GOWIN!

We are delighted to welcome those new players and we are cheering for them in this first major tournament!